The appointment will be 17:00 outside the GSSI entrance to take the bus. 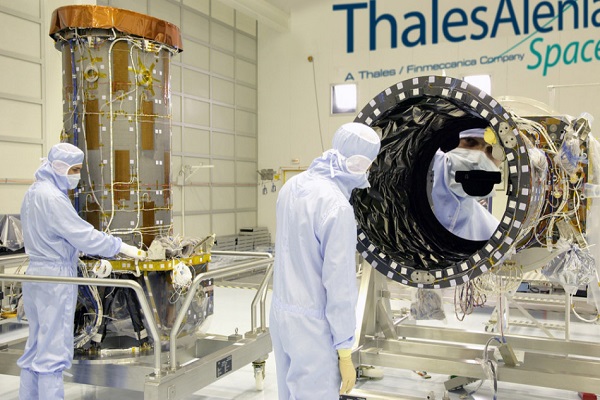 The company contributes to many of today’s leading space programs, working for both government and commercial customers, including NASA, the European Space Agency (ESA) and the Italian space agency (ASI), as well as leading satellite operators.

Thales Alenia Space in Italy invests massively in Research & Development to support a continuous stream of innovations in all sectors. It has also developed a broad network of partners from both academia and industry, including many innovative small businesses, to support R&D and Production activities.

The core of the INCIPICT Project is the construction of an experimental optical network to build a MAN – Metropolitan Area Network – that consists in an Optical Ring to connect the main and the most important sites of L’Aquila City. The Optical Ring involves the use of some experimental technologies that are designed to test new optical systems (in particular long-reach PON, software defined optics, to name only the main ones), new networking techniques (implementation and development of advanced Networking-level control plan.

Within project INCIPICT (Innovating City Planning through Information & Communications Technologies), funded by the Italian Government after 2009 earthquake, the University of L’Aquila signed an agreement with Sumitomo to deployprototype fibers of which Sumitomo is one of the very few producers world-wide. Thesefibers, referred to as “multi-core” fibers, overperform by far commercial fibers in terms of transmission capacity, when used in conjunction with Space-Division Multiplexing (SDM), a transmission approach that over the past decade has been in the spotlight of all major international conferences on optical communications. The result of this initiative will be the first deployment of SDM fibers in the world, which will offerthe national and international scientific communities a unique laboratory, which willenable implementing and testing new transmission technologies on deployed fibers,rather than in the controlled environment of a traditional research lab.

The reconstruction after the earthquake in the historical center of L’Aquila, one of the biggest historical center of the country (170ha), has been done together with the program of “modernization” of the urban armor of the cities, as it is described in the Piano di Ricostruzione (Plan for the Reconstruction) and as it is in several technological advanced project under realization. From this vision came a “smart historical center” which is part of a Territorial Vision that can be described as “Smart up-country”.
An innovative project born in December 2013 with an “Accordo di Programma” signed by the Municipality of L’Aquila and ENEL started the “Smart Grids Infrastructure for L’Aquila and its role in the habilitation of technologies and services for the smart city”, in order to realize the Smart Grids, electric networks, advanced and bidirectional, provided with automatic and tele control systems. The project also wants to develop the electric based mobility (eMobility) through the installation of recharging systems on the territory, which will be connected with the electric network.
A second project is the Smart Tunnel, an underground multifunctional structure, 12.5 km long, with the entire network services (except gas) concentrated together, making it possible to have safety, efficiency, easily maintenance and warranty for the all system. The reconstruction of the subservices of L’Aquila is considered one of the most important public committee in the post-earthquake reconstruction, with a total value of about 80 million EUR, which promoting subject is Gran Sasso Acqua Spa, society participated also by the Municipality of L’Aquila and all the Municipalities of the territory. This society manages the integrated water cycle in the “ambito territorial ottimale” (Ato).
Above those projects stands the vision of a sustainable mobility, that is predict by the realization of a urban pedestrian and bike path that will connect the nodes of the smart grid and also the new districts of the CASE Project, to integrate their functionalities with the potential of the Smart Tunnel.
It seems today a right thing to present an integrated vision of those experiences in a new way to read the urban structure and, in particular way, the historical center.